ABB Staff Shooters are doing well in the Competitive Circuit.

ABB Staff Shooters have been doing quite well so far in the 2018 Indoor Competitive Circuit.

At the Lancaster Archery Classic in Lancaster, Pennsylvania. Jacob Petite placed 6th overall in the Men’s Open Pro Division. It was Jacob’s first time shooting at the Lancaster Archery Classic. Jacob is in his first year as a staff shooter for Bill Pelligrino’s Archery Hut in Colorado Springs, Colorado. Jacob mentions that the great people at Bill’s shop always want what is best for you. Jacob shoots the ABB Platinum Series Strings on his Mathews TRX 38. Jacob noted that even with all the travel time to the event there were no variables in his strings such as stretch or peep rotation giving him the peace of mind he needed so he could focus on shooting. The result was Jacob shooting an impressive 659 out of 660 in the qualifying round putting himself into the number one position going into the elimination matches. Jacob made it through elimination matches and eventually finished in the 6th place, which is an impressive finish to this young professional archers’s career. 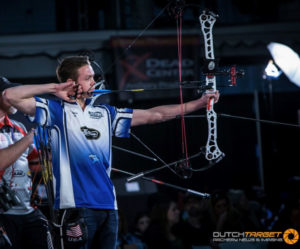 Most recently longtime ABB Staff Shooter Coty Sites had an Outstanding Finish at the Vegas Shoot 2018 in Las Vegas, Nevada. Coty was consistently at the top of his class during the 3 day event. Coty ended up with a 2nd place finish in the Mens Compound Flights Division, shooting an impressive 900-70x score for the tournament! Coty also shoots our ABB Platinum Series Strings on his Prime Centergy X1 39. 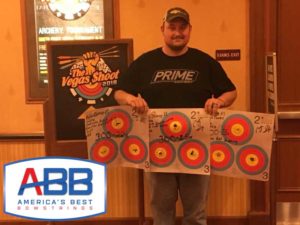 We are very proud to have such a talented group of shooters representing America’s Best Bowstrings in such a high performing way! We want to say congrats to these shooters as well as our other shooters who are out there on the competitive trails.

(pictured left, Coty Sites and his 3 perfect targets from the Vegas Shoot 2018)