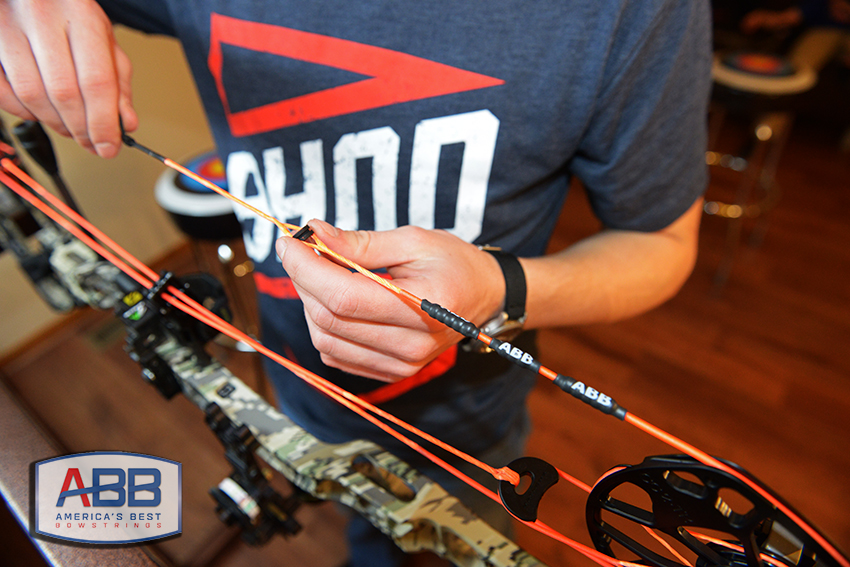 “What makes Platinum Series Custom Bowstrings different?” We hear this question almost daily. In this blog we want to discuss what separates our highest performing custom bow string from the rest of the pack.

The Platinum Series was introduced in the fall of 2015. At the very foundation of this custom bowstring is a base BCY 452X fiber. If you take a standard bowstring made out of 452X material it will still be a quick string, but when you take an ABB Platinum Series Custom Bowstring equipped with our F.A.S.T. process you will see increased feet per second added to your arrow speeds. F.A.S.T stands for Fiber Accelerated Strand Technology and was introduced in 2017. When every second counts speed can help make up for any slight mis-calculation of distance made by the archer. This is one of the driving factors for anybody looking for a high performance custom bowstring.

Also used exclusively on Platinum Series bowstrings is Fiber-Loc technology. Fiber-Loc was designed in late 2017 and released on all Platinum Series sets in 2018. Fiber-Loc is an ultra-stabilizing process that eradicates any creep from the fiber. Furthermore it eliminates any peep rotation from our custom bow strings. The result is a completely stable and high performing bowstring that will be unaffected by temperature change.

Rounding out the Platinum Series is Clear Ultra End Loops on all pieces to your set. The Ultra End Loop was designed to improve the fit and finish of your ABB custom bowstrings. While we offer the Ultra End Loop on all of our Series strings and cables the Clear is only available with Platinum. With the Ultra End Loop we slimmed down the once bulky end servings to fit into the cam track and post systems almost effortlessly, leading to less of a chance for serving separation at the end loop. With the clear halo serving allowing the colors of your bowstring to show through.

Our Platinum is a trusted choice of many top bow manufactures including Obsession Bows which uses Platinum Series custom bowstrings on most of their lineup. You will also find that PSE Archery uses our Platinum Series on several of their high performance flagship models. Among being used by the leaders in bow manufacturing our Platinum Series is currently being shot by some of the best hunting personalities such as Bill Winke and his team at Midwest Whitetail, Todd Graf and the crew at Bowhunt Or Die, and most recently Joel Burham and his Whitetail Fit brand.

If you are looking for the ultimate in high performance custom bowstrings for your compound or crossbow model then look no further than America’s Best Bowstrings and our Platinum Series strings and cables. Check out the ABB string builder and get your set today! If you have any further questions and would like to know more about what makes us the best please contact us at 1-877-893-7155.